Blue Jackets GM Scott Howson was conducting player meetings this morning, and before he finished those individual evaluations, he shared some news and notes with us regarding the upcoming offseason.

“We’ve got a lot of work ahead,” he conceded.

Getting back to work quickly will be Cam Atkinson, Dalton Prout, Maksim Mayorov and Ryan Russell, as they’re joining the Springfield Falcons. It’s crunch time in the AHL, and the Falcons need to win their final two regular season games (April 13 and 14) to keep their playoff hopes alive. John Moore and Allen York could possibly play for Springfield as well depending on their health.

While that is going on, scouts for the big club will be heading out to the IIHF under-18 tournament later this week in the Czech Republic. Howson himself will join in scouting the draft-eligible players when he arrives at that event next week.

Howson also says he is going to try to sign restricted free agents Nikita Nikitin, Derek Dorsett and Jared Boll before July 1, and he plans to talk unrestricted free agent center Derek MacKenzie sometime in the immediate future to see if they can work out a deal with him. “I think there’s some mutual interest there.”

(Responded MacKenzie: “When it’s time to make a decision on me, hopefully it’s that I’m still Blue Jacket.”)

The Blue Jackets have to review their coaching situation. “Todd Richards has done an oustanding job here in difficult circumstances,” said Howson. “He’ll be a serious candidate in anything we do here. That will take 2-3 weeks to sort out.”

And what else? What else?

Oh, yeah. There’s Rick Nash’s looming trade request. Howson said he met with Nash last week in Denver. “We had a good chat and we said we’re going to talk again here in the next 2-3 weeks, so that’s where we are.” 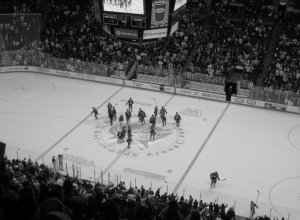 Other news and notes:

2 thoughts on “Blue Jackets Wrap Up”